Every country has the sovereign right to manage energy at radio frequencies in its territory. When the airspace through which the radio waves travel is public property (which is most of the time), and there is contention for its use (which is all of the time), regulation is required to allow the rational use of the shared resource.

Canada, Mexico and the USA coordinate radio frequency usage due to geographic proximity. The International Telecommunication Union (ITU) in Geneva facilitates coordination between countries, particularly outside of North America.

The range of radio frequencies, called the radio spectrum, is divided into blocks of frequencies, allocated for particular different services. Allocations are divided into allotments, which are bands of frequencies assigned to specific users or to the public. A license to emit radio-frequency energy at the specified frequencies in a specified area is issued by government to record the assignment of the allotment and the conditions for its use. 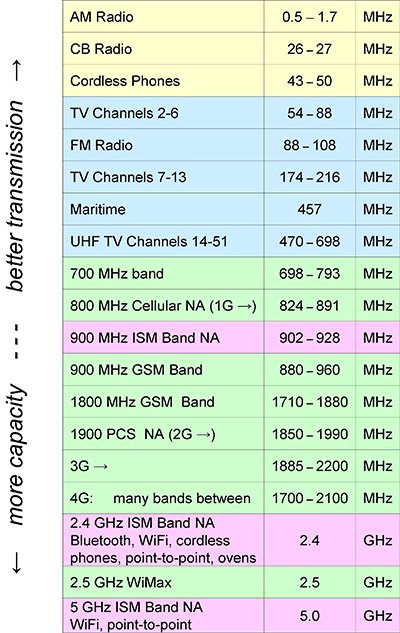 The diagram lists some of the bands that are currently in use, beginning with old-fashioned analog AM radio, CB radio and the first generations of in-home analog cordless phones.

Analog TV channels 2-13, interrupted by a band for analog FM radio is next, followed by the Maritime VHF radio band and the UHF television channels from 14-51.

The 700-MHz band used to be for UHF channels 52 and up, recently reallocated for new applications including cellular and Wi-Fi-like services.

Google's involvement in the US auction for allotments in the 700-MHz band in the US caused the inclusion of conditions in the licenses requiring openness: use of any phone and roaming on any carrier.

The 800-MHz band was initially allocated for the first generation of mobile cellular radio in North America.

At 900 MHz is an unlicensed band, meaning allocated to the public, and a license to emit energy at that frequency is not required. These bands are also called Industrial, Scientific and Medical (ISM) bands. The 900-MHz band was used for cordless phones in North America.

In the rest of the world (called "Europe" in the telecom business), the 900-MHz and 1800-MHz bands were allocated for second generation mobile called GSM: the Global System for Mobile Communications.

In North America, the 1900-MHz or 1.9-GHz band was initially allocated for the second generation of cellular, called Personal Communications Services. New bands are allocated, and older bands are re-allocated to new third generation and fourth-generation cellular systems on an ongoing basis. These bands lie in the frequencies below 2.4 GHz.

At 2.4 GHz is another ISM band. This band is used by numerous technologies including Bluetooth, Wi-Fi, cordless phones, private point-to-point transmissions and … microwave ovens, to avoid the need for a license. This makes the 2.4 GHz band noisy.

WiMax, like Wi-Fi on steroids requires a license typically at 2.5 GHz.

The 5 GHz ISM band is used for Wi-Fi and point-to-point systems. Satellite and other line-of-sight communication systems use frequencies above 5 GHz; but as with everything else, there are tradeoffs.

It turns out that the capacity, the widths of the bands, is very good at high frequencies, but transmission characteristics like penetration through walls are not so good. Lower frequencies experience much better transmission characteristics but have lower capacity. The sweet spot appears to be in the range 500 MHz – 2500 MHz with current technologies.