Tutorial: Telecom Circuits from the Phone Company's Point of View

Building a structured understanding of the fundamentals is the key to mastering telecom, datacom and networking technologies and services. The following discussion is a pillar of all of our training.

This previously appeared as an article in the free monthly Teracom newsletter. subscribe

From the phone company's point of view, their telecommunications network is composed of three main parts: the access network, switching centers and the transmission network. 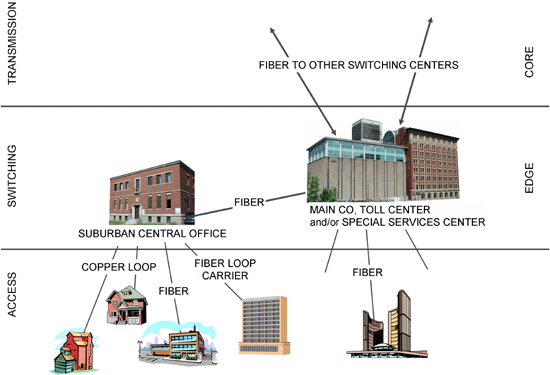 Most of the access network is put in place for residential service, primarily POTS, Plain Ordinary Telephone Service. This service is provided on two copper wires, called a loop or local loop. The purpose of these wires is to transfer signals from the customer to the service provider and vice-versa. In most cases, the loop is directly wired to a switch via cables. In some cases, a fiber-optic or digital radio loop carrier system is used to carry many signals from loops back to the CO.

The rest of the access network is for other services including high-capacity access on copper wires and on fiber for large organizations. If we wanted to stretch the model a bit, we could also consider cellular radio systems a type of access technology.

Switches are devices that connect one circuit to another for the duration of a communication session.

Switching centers include Central Offices, where the access network ends and the transmission network begins. A CO switch connects a user's loop to a particular inter-office circuit to make an end-to-end communication path for the duration of a phone call, and then releases it so someone else can use that inter-office circuit. This technique of establishing end-to-end communications across a network is called circuit-switching. It is sometimes also referred to as dial-up.

To avoid having to connect all of the COs in a network directly to each other, they are connected to area switches (also called toll switches) that are in turn connected to other area switches. The usual arrangement is to have a building called a toll center in a city, to which all of the CO switches are attached. The toll center has toll switches that make the CO-to-CO connections across long-distance trunks.

The transmission network connects switches, multiplexers and routers in a Central Office to similar equipment in other switching centers. This includes direct connections between COs within a city and connections for long-distance communications.

Connections between switches were called trunks; a trunk carries one telephone call. For the most part, trunks are not individual circuits, but instead are carried on fiber-optic based trunk carrier systems. The most popular technology used to do this was called SONET (Synchronous Optical Network). In days past, microwave radio trunk carrier systems on towers were used.

Today, voice is packetized for transmission and Optical Ethernet is used to organize and represent the bits on fiber for all new installations.

These carrier systems carry both telephone calls, as well as data services, Internet traffic and in fact, all services, multiplexed or combined together in high-speed streams of bits.

Since everything is carried together, redundant connections must be made between COs and other switching centers to protect against cut lines. The most cost-effective way of doing this is to connect switching centers together neighbour-to-neighbour to form rings.