Whether you're interested in voice, data or networking, it is important to have an understanding of the structure and operation of the telephone network. 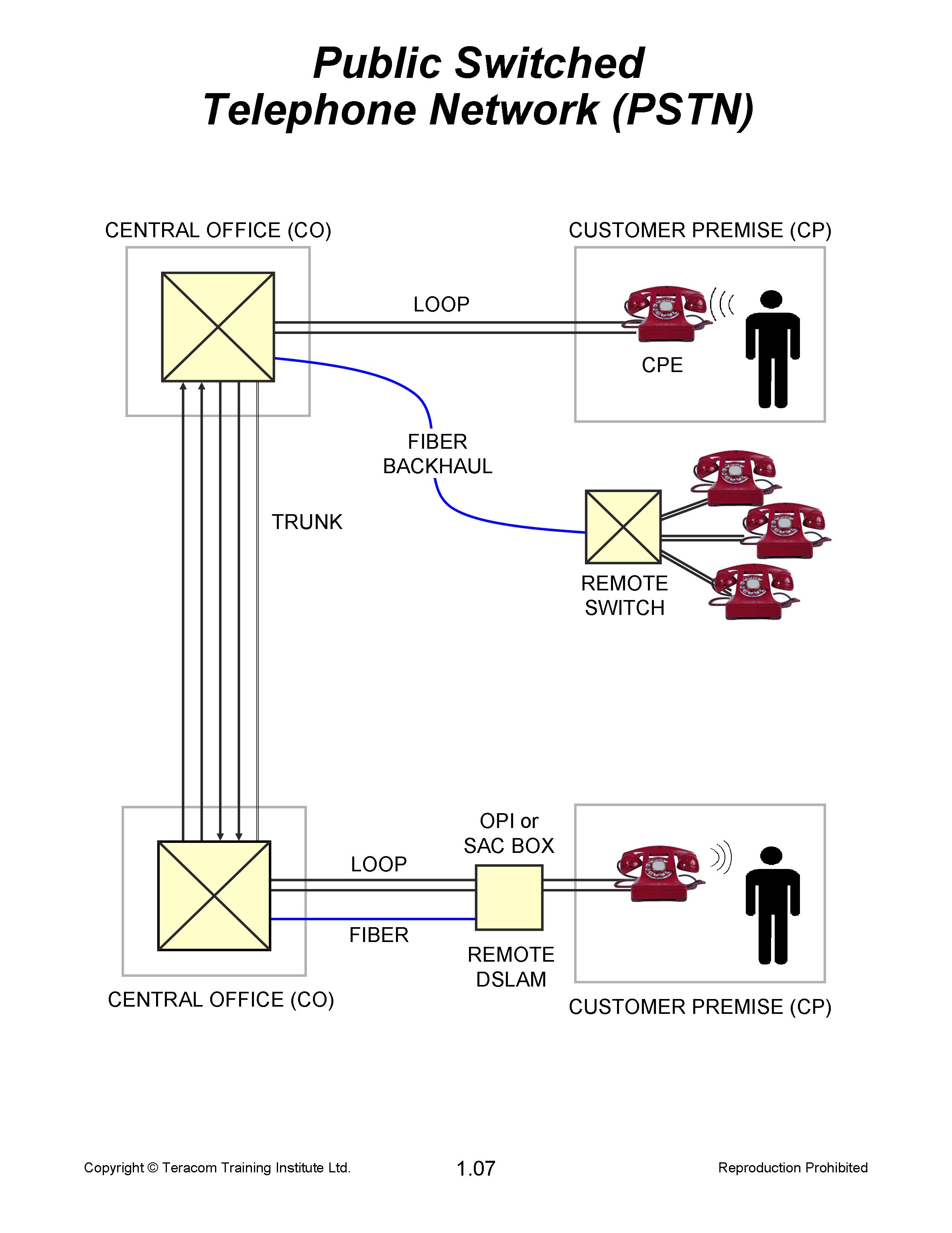 There is a maximum length for the local loop, which is usually 18,000 feet – about three miles or five kilometers. Copper is a good conductor of electricity - but not perfect: it has some resistance to the flow of electricity through it. Because of this, the signals on the loop diminish in intensity or attenuate with distance… if the loop was too long, you wouldn't be able to hear what the other person was saying. Thus, COs traditionally had a serving area of three miles radius around them, about 27 square miles or 75 km2.

With suburban sprawl, we can't build COs every five miles, so in practice, new subdivisions are served from remote switches, which are low-capacity switches in small huts or underground controlled environment vaults. The remote provides telephone service locally on the loops in the subdivision. The backhaul connects the remote switch back to the nearest CO via fiber.

Other equipment in the outside plant includes remote DSLAMs, the device containing the network-side modems that customer modems communicate with, housed in an enclosure by the side of the road. The backhaul for these devices is fiber plus often copper wires carrying electricity to power the DSLAM.

In the future, these two remote devices will merge together.

Telephone switches were historically connected with trunks. While subscriber loops are dedicated access circuits from the customer premise to the CO, trunks are shared connections between COs.

To establish a connection between one customer premise and another, the desired network address (telephone number) is signaled by the customer to the switch over their loop, the switch selects an unused trunk circuit going in that direction and reserves it, called seizing the trunk, then connects the caller's loop to that trunk, for the duration of the call. When one end or the other hangs up, the trunk is released for someone else to connect between those two COs. This method for sharing the trunks is known as circuit switching.

In systems installed up until about 2005, trunks were carried on the transmission network using channelized fiber optic transmission systems. A channel is a reserved fraction of the capacity of the transmission system, 64 kb/s, called a DS0. The caller's voice would be carried from one end to the other at 64 kb/s over reserved channels. This happens in both directions at the same time, and 64 kb/s is transmitted whether the caller is speaking or not.

However, the new-generation all-IP network moves IP packets, as needed, not reserved channels, and the telephones communicate packets directly one to another once a call is set up.

The transition between the two plans, channels and packets, is and will be a long process.

For obvious business reasons, telephone companies do not replace equipment just because something new comes along. There are still many CO switches that perform the previous technique, circuit switching.

To keep operating the "old" circuit switch with the "new" IP backbone, a Packet Voice Gateway is installed between the switch and the transmission network, transcoding between packets and channels, and between the different call control messages used on each side.

To keep operating "old" channelized transmission systems with the "new" IP backbone, all of the channels are combined together to make one high-speed channel, used all at once to connect routers at each end, which communicate packets to each other.

It is important to note that even though today there is digital switching, routing and transmission, the last 3 miles or 5 km of the network, the subscriber loop, still has its original characteristics, and is still used to carry an analog voiceband signal... technology that dates back to the late 1800s (!) that is part of Plain Ordinary Telephone Service (POTS).

Of course, eventually all telephone calls will be carried as IP packets from the customer premise to the network, interspersed with Internet traffic and television on the same fiber, DSL or cable modem access circuit.

But, if there is a regular telephone plugged into a jack on the equipment at the customer premise, the last three feet is still going to be voiceband analog POTS.

And, most of the technologies developed and equipment deployed in the 20th century - which is the installed base - was for POTS. So POTS remains part of the fundamental knowledge set in the telecommunications business.