The Internet Protocol (IP) is part of the TCP/IP suite of protocols developed by the US military and now used on the Internet, on carrier networks and on business systems. IP is a network protocol, defining the network address and packet format.  An IP network address is the equivalent of a telephone number.

IP was originally the Inter-net protocol, developed beginning in the late 1960s as a common format for communication across existing networks that used various different packet formats. Subsequently, IP took over, and today there aren't really any different kinds of packet networks, pretty much all packet networks use IP as their native format. 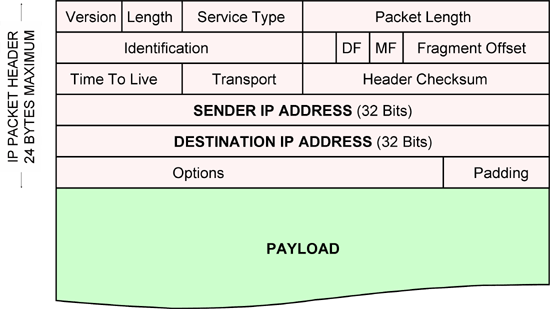 The term packet means a segment of data, the "payload" in the diagram above plus network control information added on the front. The data can be literally anything: a piece of an email message, a piece of a web page, digitized voice for telephone calls, video in all its forms, Google maps data, anything.

The IP address identifies the final destination of a packet. This information is used by routers to decide where to go next at each router.

Many times, one of these "users" is a server, for example, a web server, an email server or a video server. For a Voice over IP phone call, both users have IP telephones.

The diagram illustrates the elements in the IP version 4 (IPv4) header including the Don't Fragment (DF) field and the More Fragments (MF) field which are used to control whether the block of data to be sent over the network can be divided into a number of segments, one segment per packet, or not, and whether this has actually happened or not.

The most interesting part of the IP header is the source (sender) IP address and the destination IP address.

Using IP implements a connectionless network service, which means that at the network level, there is no communication with the receiver. Packets are sent off on the network to fend for themselves. There are no guarantees that the packets will be delivered. There is no error check on the data being carried in the packet.

A higher-level protocol is required to perform error checking and to deal with packets that are not delivered. This is usually implemented with TCP... but that's a different lesson.

Since IP packets and addresses are part of the fundamentals of telecom, this discussion is included in most of Teracom's training courses.

These topics are covered in online certification courses: And instructor-led training courses: And textbooks:
Benefit from decades of knowledge, insight and experience distilled into clear lessons designed for non‑engineers, logically organized to build one concept on another… in plain English. Join our thousands of satisfied customers including: