Wireless radios, cable modems, DSL and even analog telephone lines all share a characteristic: they are restricted to a range of frequencies that does not include 0.

This is often called a pass band or pass-band channel, since there is a range of frequencies that will be passed through this channel and energy at all other frequencies is suppressed.

To communicate data, the challenge is to find a method of representing 1s and 0s in a way that can be carried over this pass band.

One question sometimes asked is, "Why not transmit the binary digits 'digitally'?" What is meant by this is, "Why not use pulses of voltage, for example, +3 volts applied to the line for a short time to represent a "1" and -3 volts to represent a zero?"

The answer for radio, cable modems, DSL and analog telephone lines (a.k.a. Plain Ordinary Telephone Service, POTS) is the same: Using POTS as a familiar example, the answer for POTS is that the telephone company has provided a voiceband circuit by plugging the copper wire loop into a line card on a telephone switch. The line card has a filter on it that blocks the transmission of energy at any frequencies less than 300 or greater than 3300 Hz. Only energy in the pass-band range from 300 - 3300 Hz is transmitted. 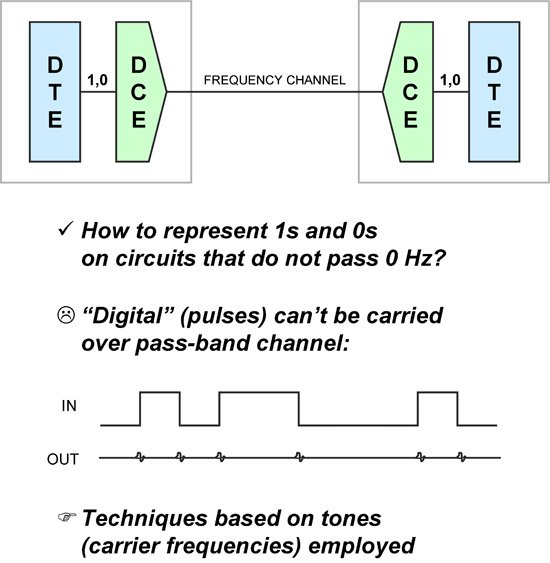 Representing the binary digits as pulses of voltage, which would look something like a square wave on the line ("IN" in the diagram), would require a component at 0 Hz, and a series of frequency components at frequencies higher than 3300 Hz.

But the filter on the line card suppresses energy outside the pass band. Only energy in the frequency band between 300 and 3300 Hz is passed; everything else is suppressed.

What would make it through the voiceband filter would be a flat line with some ringing on the line at the edges of the pulses. ("OUT" in the diagram). Adding the line noise to that, it becomes very difficult to detect the edges of pulses at the far end... so pulses will not work on a POTS line.

The story for radio channels, cable modem channels and DSL is the same - only the numbers change.

A design that will work on a passband channel is one that employs tones or carrier frequencies that are within the pass band.

Variations in the amplitude (volume) of a single pure frequency within the pass band, or variations of the frequency, its phase, or combinations thereof will be passed to the other end, and so this is a method that can successfully represent 1s and 0s in the frequency channel.

The technique of representing 1s and 0s by varying characteristics of tones is called modulation. The equipment that performs this function is called a modulator/de-modulator or modem for short.