IP addresses may be static or dynamic.

Dynamic addresses are acceptable for a machine running client software, since the way things are organized is that the client initiates communications with a server, and includes its "return address" (the source IP address) in every packet sent to the server.

To communicate to a server, it is necessary to find out the numeric IP address of the server before the client can communicate to it. That is often accomplished through the Domain Name System (DNS), essentially tables where the IP address of a server can be looked up. To avoid having to frequently update those tables, servers are generally assigned static addresses. 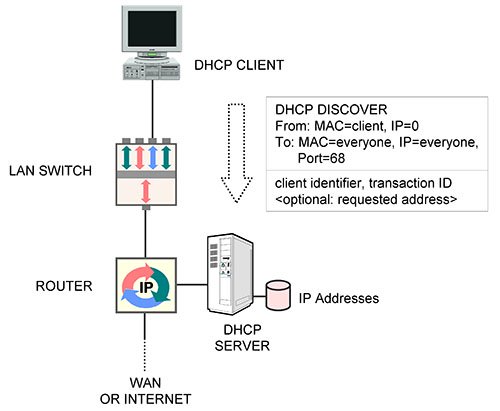 Addresses are assigned to a computer using the Dynamic Host Configuration Protocol (DHCP). The system administrator provisions a DHCP server, configured to assign IP addresses within a defined range to clients. Computers are loaded with DHCP client software.

Each computer will run a DHCP client when it starts, generating a DHCP Discover message as illustrated above.

Any DHCP server that receives it, and there may be more than one, will respond with a DHCP Offer message, with an offered IP address and a lease time: 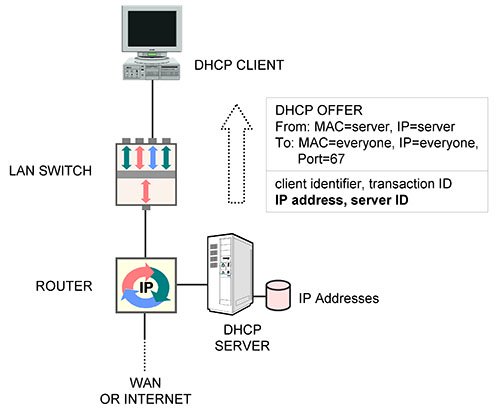 The client will answer with a DHCP Request message to confirm its selection of an offered address: 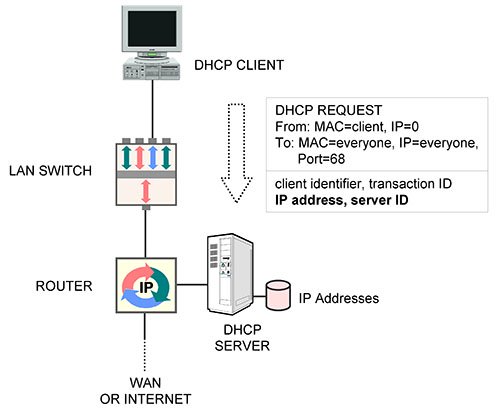 Then the server will complete the cycle with a DHCP ACK that usually includes other configuration information such as the IP address of the default gateway (CE router), the IP address of one or more DNS servers and the subnet mask, which indicates what bits in the address are the host or machine ID: 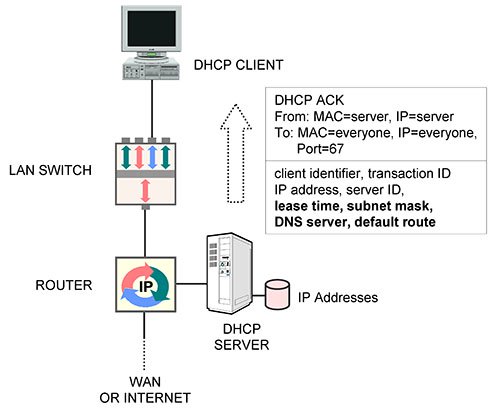 There are several variations on the basic process, all of which are enumerated in the relevant standards document, RFC 2131.

On expiry of the lease time, the DHCP client must begin the discover process anew. If a DHCP client runs while still holding a valid lease, it will request to be assigned the same IP address. If there are many clients constantly running DHCP (an ISP's customers, for example), then it is likely that a different IP address will be offered by the server each time a computer runs its DHCP client.

The lease time may be configured by the system administrator to any value. This function might be useful to help manage situations where there are more clients than addresses. If the DHCP server reaches the end of its configured range of addresses, it attempts to re-assign previously-assigned addresses to new requestors, beginning with those previously-assigned addresses for which the lease has expired. Before re-assigning the address to a different machine, the server might optionally ping the address to determine if it is still in use.

Even though it is the "dynamic" host configuration protocol, DHCP is also used to assign static addresses to machines.

This is accomplished with a table in the server, configured by the system administrator, which relates MAC addresses to IP addresses.

This allows the assignment of static addresses to computers from a centralized management system (the DHCP server), conveyance of other information like default gateway and netmask, and eliminates the need for any human involvement (and its associated errors) in configuring computers.

In Windows, you can see the IP address currently assigned to a computer, as well as its LAN card MAC address by opening the Network Connections folder and viewing the "status" of the LAN card.

If under "properties" of the TCP/IP protocol the choice "obtain a network address automatically" is selected, the DHCP client is run at startup and when "repair this connection" is clicked.