We begin understanding VoIP with a top-level view of the major components of a VoIP system. These components may be located at the customer premise, at a carrier, at a third party, or any combination thereof.

Discussion of VoIP system components necessarily involves discussion of IP and other related protocols, which are covered later in the course. Some of the protocols are introduced in this lesson, and explained in detail in subsequent lessons. 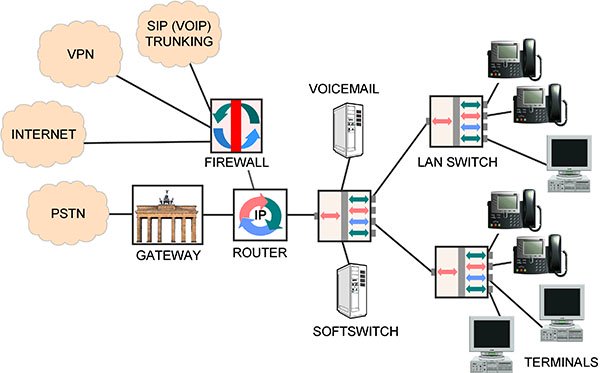 Beginning at the right side of the diagram, a VoIP system includes the following basic elements:

Terminals, including both dedicated-purpose IP telephones as well as soft phones, which are software applications running on general-purpose computers using Windows, Android and other operating systems.

A VoIP terminal has a keypad, a speaker and microphone, a codec to convert between analog and digital, and a protocol stack to handle the stream of digitized speech in typically 20 ms segments with timing variation correction, sequencing and error control.

Since it is a Voice over IP system, the terminal must also necessarily have an IP protocol stack for communication of the segments of digitized speech in IP packets, the DHCP protocol to obtain an IP address, a LAN interface and MAC address and physical wired or wireless connection to the network.

The terminal may optionally have many other features, functions and protocols such as a display screen and Internet browser incorporated.

Another type of terminal is a voicemail system, which may be called an Integrated Messaging System if it handles multiple different types of messages like voice, email, short text messages, fax, and supports functions like voice-to-text and text-to-voice.

Another component of a VoIP system is the physical connections, implemented with LAN infrastructure, consisting of LAN cabling or wireless LANs, and LAN switches.

The softswitch, also called a SIP server, SIP proxy or call manager, is an important component of a VoIP system. Its main function is to assist in call setup. The softswitch also manages terminals, regulates admission to the VoIP system and provides terminal authentication, registration, status and address resolution as well as call control.

The router connects LAN segments, properly called broadcast domains, to each other within the building, and to external connections, including to a gateway to get to the circuit-switched PSTN, and direct to the Internet, VPN services and SIP trunking services that move VoIP packets natively long distance.

A firewall system is required to manage connections to other IP networks. This includes The Internet, which allows any communications to anywhere but with no guarantees, Virtual Private Networks (VPNs), which allow any communications to specific locations (e.g. other locations of an organization), and may include performance guarantees, and SIP trunking, which carries VoIP to specific locations in native format, with performance guarantees suitable for telephone calls, and may include gateway service to convert VoIP to traditional telephony for calls terminating on the PSTN.