Tutorial: Common Use for Hexadecimal

Numbering Systems (Part Four of Four: What Hex is Used For)

Hexadecimal (or hex for short) is perhaps most often used in practice as a short form for binary numbers.

Just segment the binary number into groups of four bits, and convert each set of four bits individually to their hex equivalent.

Why is hexadecimal used in this manner? Because the binary number system requires so many symbols to represent a given quantity. 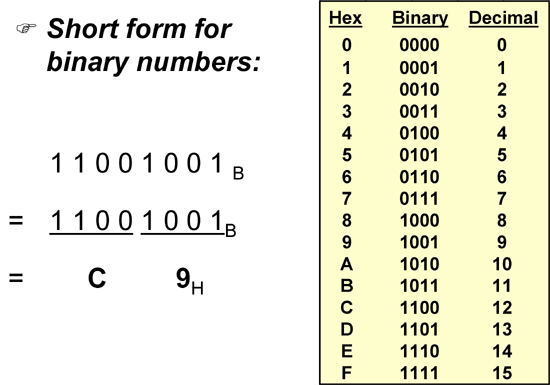 The hexadecimal equivalent of this number is C9.

The hex version uses only 1/4 the symbols, and so is easier to write and to pronounce.

So in practice, hexadecimal is used as a short form for writing binary numbers down on pieces of paper and displaying them on computer screens.

Last point: hex is for humans.  It is a short way of writing binary numbers on paper.  Computers know nothing of hex; computers only know about 1s and 0s: binary.

These topics are covered in online certification courses: And instructor-led training courses:
Benefit from decades of knowledge, insight and experience distilled into clear lessons designed for non‑engineers, logically organized to build one concept on another… in plain English. Join our thousands of satisfied customers including: