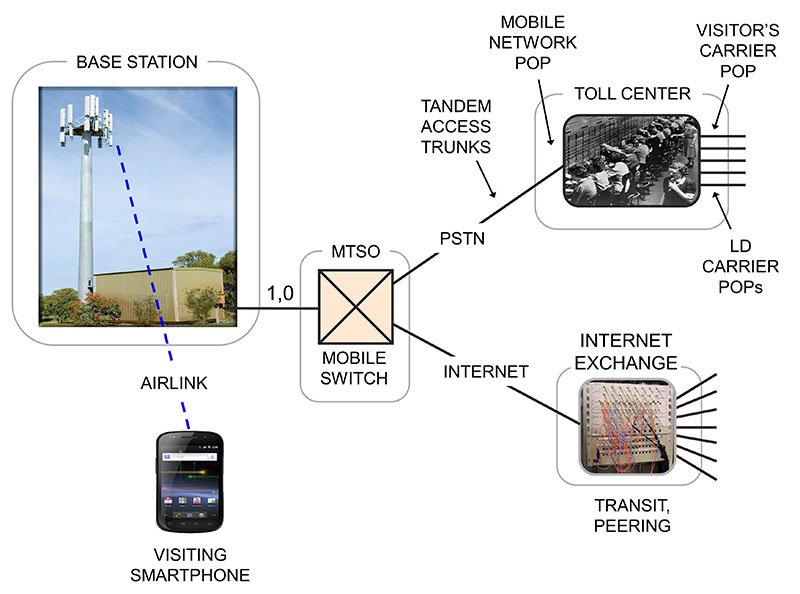 Mobile Network Operator (MNO) is the term usually used to refer to a facilities-based carrier, i.e. a company that owns base stations, a mobile switch, backhaul between them, and spectrum licenses, and sells services to the public, and to other carriers.

The MNO implements external links to other carriers for PSTN phone calls and for Internet traffic.

For PSTN phone calls, the MNO implements a fiber optic connection to a building traditionally called a Toll Center or Class 4 switching office. The termination of their fiber in that building is called a POP. It is their physical point of presence in the building.

Many other carriers have POPs in the building, including the ILEC, IXCs, CATV companies, other mobile carriers, and any other company that wants to connect phone calls to a phone on the MNO's network.

The operator of the toll center, usually the ILEC, provides a switch in the Toll Center to switch phone calls from one carrier's POP to a different carrier's POP.

For Internet access, the MNO implements a fiber optic connection to one or more Internet Exchange buildings, where they pay the operator of the IX to route packets to other carriers with whom the MNO has established IP packet transit and peering arrangements.

Mobile Virtual Network Operator (MVNO) is the term used to refer to a non-facilities-based carrier: one that does not own the hardware or spectrum licenses or POPs.

Instead, the MVNO enters into a long-term contract with one or more facilities-based carriers to have them supply a "white label" service that the MVNO sells.

Typically the MVNO will develop a unique branding and sell smartphones and tablets to go along with its service.

When the MVNO deals exclusively with one carrier, the MVNO bill to the customer would be typically generated by the facilities-based carrier as a white-label service.

If the MVNO is very large and deals with multiple carriers, the MVNO may operate their own billing system, which is a significant investment.

The facilities-based carrier charges to the MVNO include a volume-discount rate for IP addresses and Internet traffic, voice-minute airtime and switched access to the POP for PSTN phone calls.

The MVNO also has to pay for connectivity from the POP to other toll centers for "long-distance" connections, and the switched-access charge at the far end.

The rate plan the MVNO pays could be a mix of fixed-rate leases and usage-based billing.

Unless the MNO is obliged to sell capacity to MVNOs through regulations and tariffs, the nature of the plan is confidential business information.

Roaming service is very similar to the service provided to MVNOs, in that it is the MNO that is providing the airlink, base stations, backhaul, mobile switch and connections to the PSTN and Internet.

In the case of roaming, the visitor uses their own phone, and billing is usage-based.

Roaming is an important feature for smaller players: they are facilities-based in selected cities, but to offer a national and international service to their customers, they must have roaming agreements in place with MNOs in other locations.

By denying roaming service to smaller or startup carriers, or charging an exorbitant price for roaming, an incumbent carrier can erect a barrier against competition.

In many countries, the right to roam and the wholesale cost of roaming is regulated to encourage competition.

These topics are covered in: