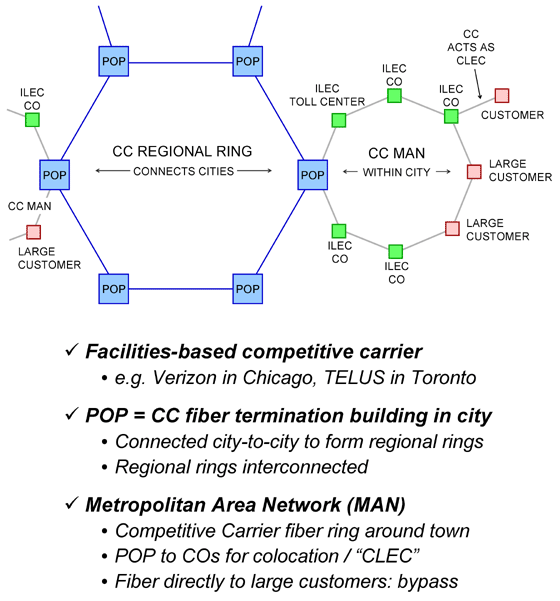 Subsequent legislation and regulatory decisions unbundled the ILEC's physical access network from the ILEC's services provided on that network. This enabled competitive carriers to lease just the ILEC's physical cabling to the customer instead of paying for a tariffed service. If the ILEC is providing copper wires without electricity on them, i.e. not attached to a CO switch line card, this is called a dry circuit. A fiber not attached to a line card is called dark fiber.

In addition to being required to lease dry copper or dark fiber to their competitor, the ILEC is required to build collocation facilities in its COs. These are rooms, often with separate entrance doors, where the competitive carrier can locate their own circuit-terminating equipment like modems and line cards, and network equipment like switches, multiplexers and routers.

When a company collocates equipment in the CO and connects it to the ILEC's cabling, the competitive carrier is said to be acting as a Competitive Local Exchange Carrier (CLEC).

Going even further, the competitive carrier can simply lay their own fiber from their POP to their large customers and bypass the ILEC altogether.

A current model for a competitive carrier's network, depicted above, includes the POPs in cities connected together to form a "long distance" backbone, more properly called the network core, plus one or more Metropolitan Area Networks (MANs) built out from the POP in each city.

To ensure high availability in any kind of network, more than one physical connection is required to every station, on different cables, to protect against cut lines. It turns out that the cheapest way to do this is to connect them neighbor-to-neighbor-to-neighbor to form a ring.

The competitive carrier's POPs in cities are connected to form regional rings, which are interconnected at multiple places to implement national communications.

Within a metropolitan area, a competitive carrier will install or lease fiber to connect their POP to the ILEC's toll center, to the ILEC's COs where they have collocations, and to their large customers. These physical locations are also connected neighbor-to-neighbor to form a ring for redundancy; the ring is the MAN.

These topics are covered in instructor-led training courses: