Bluetooth is a set of standards for short-range digital radio communication published by a consortium of companies called the Special Interest Group. It was originally developed as a wireless link to replace cables connecting computers and communications equipment.

Bluetooth connections are called piconets and Personal Area Networks since (in theory) up to eight devices can communicate on a channel within a range of 1 to 100 meters depending on the power. In reality, Bluetooth is mostly used point-to-point with ten meters range.

The first data rate for Bluetooth was 0.7 Mb/s, followed by an enhancement to "3" Mb/s (2.1 Mb/s in practice). A High Speed variation employs collocated Wi-Fi for short high-bitrate transmissions at 24 Mb/s. The Smart or Low Energy variation allows coin-sized batteries on devices like heart-rate monitors. 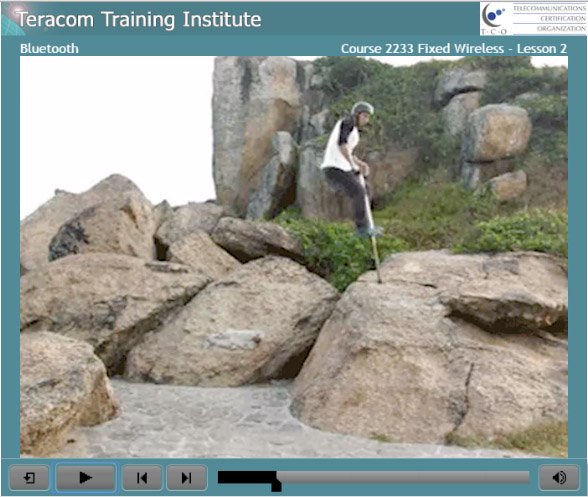 Young man illustrating Bluetooth channel as frequency-hopping pattern using a pogo stick.
Click the image to watch the full lesson. The text that follows is from the CWA Study Guide.

Bluetooth implements frequency-hopping, where the devices communicate at one of 79 carriers spaced at 1 MHz in the 2.4 GHz unlicensed band for 625 microseconds (µs), then hop to a different carrier for 625 µs, then to another, in a repeating pattern known to both devices. A particular hop sequence is called a channel, and is identified by an access code.

This is called Frequency-Hopping Spread Spectrum (FHSS), since hopping between 79 carriers spreads energy across spectrum 79 times wider than one carrier. It has the advantage of reduced sensitivity to noise or fading at any particular carrier. If different pairs of devices are using different hop sequences, they can communicate at the same time in the same place without interfering. There are security advantages if the hop sequence can not be determined by a third party.

The initiator of communications is called the master. It determines the frequency hopping pattern, when the pattern begins, when a packet begins and when a bit begins. The packet and bit timing is based on the master's clock, which ticks every 312.5 microseconds. Two ticks make a slot. A slot corresponds to a hop. The master transmits and the slave listens in even-numbered slots; vice-versa in odd-numbered slots. To establish the channel, the master derives a channel access code from its Bluetooth address, and indicates the code to the slave at the beginning of every packet. Both master and slave use this to determine the actual frequency-hopping sequence.

Discovering other devices means sending requests in packets on pre-defined channels called inquiry scan channels. Making a device discoverable means it listens on the inquiry channels, and responds to inquiries with information like its Bluetooth address, name and capabilities. This results in a list of Bluetooth devices displayed on the discovering device, such as a smartphone.

Connecting to a device means paging the device on its paging channel, a channel with access code derived from the target's Bluetooth address. Devices listen on their paging channel, and respond to pages to establish a session. Once the session setup protocol is completed on the paging channel, the devices begin communicating on the channel defined by the master. 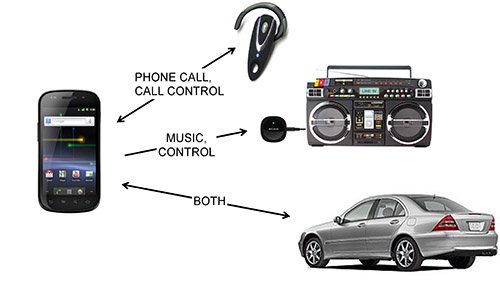 Applications include wireless keyboard, mouse and modem connections… though today, 2 Mb/s Bluetooth is likely slower than the modem.

Bluetooth is used to replace wires connecting a phone to an earpiece, or to an automobile sound system for hands-free phone calls while driving. In this case, both two-way audio and two-way control messages are transmitted.

Bluetooth is also used to stream music from a smartphone to a receiver connected to an amplifier and speakers in an automobile or in a living room.

In the future, wireless collection of readings from devices like heart-rate monitors will be widespread.

Each of these types of applications corresponds to a Bluetooth profile, which is a specified set of capabilities and protocols the devices must support.

These topics are covered in online certification courses: And available in the CWA Certification Study Guide